When Did the First Cosmic Structures Form?

Quasars are the most distant distinct objects that astronomers have been able to directly detect. Because of their intrinsic brightness, the most distant quasars are seen at a time when the universe was one tenth its present age, roughly a billion years after the Big Bang. However, astronomers believe that some objects must have formed earlier than quasars, because the ambient gas in the universe is observed to be ionized at a relatively early time, presumably due to ionizing radiation from a population of early objects. Since ionized gas can interact with cosmic microwave background photons, WMAP observations help to elucidate the nature of the ionized gas and the objects that caused the ionization.

Since light travels at a finite speed, distant objects are seen as they existed in the past. We see the Sun not as it is now, but how it was eight minutes ago. (The Sun is eight light minutes away from the Earth). We see the nearby stars as they were several years ago. We see Andromeda, the nearest spiral galaxy as it was roughly 2.5 million years ago. Thus, the most distant objects that we see are the oldest objects that we can directly detect.

Quasars are the most distant distinct objects that astronomers have been able to detect. In a region smaller than our solar system, a quasar emits more light than our entire Milky Way galaxy. Quasars are believed to be supermassive black holes, whose masses exceed that of a million Suns, and whose pull is swallowing gas and stars from their host galaxies. They shine brightly by converting the gravitational energy of the infalling material into light. The most distant quasars are seen at a time when the universe was one tenth its present age, roughly a billion years after the Big Bang.

HST Image of a Quasar Interacting With a Galaxy: 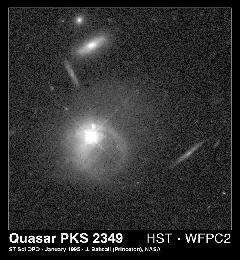 Since light from a quasar illuminates all of the material along its path to us, quasars serve as distant flashlights revealing the properties of the early universe. By observing quasars, astronomers have learned that almost all of the hydrogen gas in the early universe was ionized into protons and free electrons within a billion years after the Big Bang. They have also inferred that the known quasars were not energetic enough nor common enough to ionize all of the gas in the visible universe.

What Ionized the Gas in the Early Universe?

Astronomers are not certain what objects ionized the gas in the early universe nor do they know when this ionization occurred. Some speculate that an early generation of massive stars ionized the gas. Others speculate that most galaxies contain supermassive black holes and that the formation of these supermassive black holes illuminated the early universe.

When Was the Gas Ionized?

Scattered light is often polarized. On a bright day, we see not only sunlight directly from the Sun, but also light that scatters off of dust in the air. This scattered light, or "glare", is polarized and can thus be filtered out by a good pair of polarized sunglasses. Similarly, scattered cosmic microwave background photons are polarized by scattering off of free electrons in the early universe. WMAP is designed to detect polarized photons. In principal, their properties reveal the number of free electrons in the early universe and the ionization history of the universe. This enables astronomers to infer that the first objects in the universe capable of ionizing the gas formed at about 400 million years after the Big Bang. We hope that the time history of the ionization will help determine the nature of these first objects.