The Wilkinson Microwave Anisotropy Probe (WMAP) mission reveals conditions as they existed in the early universe by measuring the properties of the cosmic microwave background radiation over the full sky.

The content of this image tells us much about the fundamental structure of the universe. 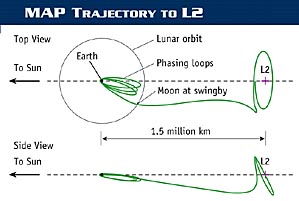 The Spacecraft was launched June 30, 2001 on a Med-Lite Delta II 7425-10 vehicle into a lunar assisted trajectory to the Sun-Earth L2 libration point for a nominal 27 month mission (3 months transit to L2, 24 months observing). The mission was subsequently extended to collect additional flight data. The total payload mass is ~830 kg. The WMAP instrument is continuously shaded from the Sun, Earth, and Moon by the spacecraft to allow lower thermal disturbances. WMAP ended the collection of science data on August 19th 2010.

The WMAP instrument consists of a set of passively cooled microwave radiometers (connected to radiator panels with metal straps) with 1.4 x 1.6 meter diameter primary reflectors to provide the desired angular resolution. Measuring the temperature of the microwave sky to an accuracy of one millionth of a degree requires careful attention to possible sources of systematic errors. The avoidance of systematic measurement errors drove the design of WMAP:

View a live 3D model of the Observatory!