The Life and Death of Stars

Where are Stars Born?

Astronomers believe that molecular clouds, dense clouds of gas located primarily in the spiral arms of galaxies are the birthplace of stars. Dense regions in the clouds collapse and form "protostars". Initially, the gravitational energy of the collapsing star is the source of its energy. Once the star contracts enough that its central core can burn hydrogen to helium, it becomes a "main sequence" star. 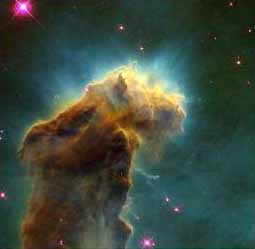 Main sequence stars are stars, like our Sun, that fuse hydrogen atoms together to make helium atoms in their cores. For a given chemical composition and stellar age, a stars' luminosity, the total energy radiated by the star per unit time, depends only on its mass. Stars that are ten times more massive than the Sun are over a thousand times more luminous than the Sun. However, we should not be too embarrassed by the Sun's low luminosity: it is ten times brighter than a star half its mass. The more massive a main sequence star, the brighter and bluer it is. For example, Sirius, the dog star, located to the lower left of the constellation Orion, is more massive than the Sun, and is noticeably bluer. On the other hand, Proxima Centauri, our nearest neighbor, is less massive than the Sun, and is thus redder and less luminous.

Since stars have a limited supply of hydrogen in their cores, they have a limited lifetime as main sequence stars. This lifetime is proportional to f M / L, where f is the fraction of the total mass of the star, M, available for nuclear burning in the core and L is the average luminosity of the star during its main sequence lifetime. Because of the strong dependence of luminosity on mass, stellar lifetimes depend sensitively on mass. Thus, it is fortunate that our Sun is not more massive than it is since high mass stars rapidly exhaust their core hydrogen supply. Once a star exhausts its core hydrogen supply, the star becomes redder, larger, and more luminous: it becomes a red giant star. This relationship between mass and lifetime enables astronomers to put a lower limit on the age of the universe.

Death of an "Ordinary" Star

After a low mass star like the Sun exhausts the supply of hydrogen in its core, there is no longer any source of heat to support the core against gravity. Hydrogen burning continues in a shell around the core and the star evolves into a red giant. When the Sun becomes a red giant, its atmosphere will envelope the Earth and our planet will be consumed in a fiery death.

Meanwhile, the core of the star collapses under gravity's pull until it reaches a high enough density to start burning helium to carbon. The helium burning phase will last about 100 million years, until the helium is exhausted in the core and the star becomes a red supergiant. At this stage, the Sun will have an outer envelope extending out towards Jupiter. During this brief phase of its existence, which lasts only a few tens of thousands of years, the Sun will lose mass in a powerful wind. Eventually, the Sun will lose all of the mass in its envelope and leave behind a hot core of carbon embedded in a nebula of expelled gas. Radiation from this hot core will ionize the nebula, producing a striking "planetary nebula", much like the nebulae seen around the remnants of other stars. The carbon core will eventually cool and become a white dwarf, the dense dim remnant of a once bright star.

Image of a Planetary Nebula: 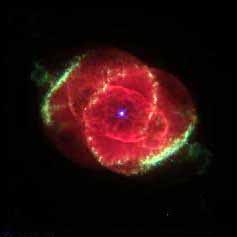 Death of a Massive Star

Massive stars burn brighter and perish more dramatically than most. When a star ten times more massive than Sun exhaust the helium in the core, the nuclear burning cycle continues. The carbon core contracts further and reaches high enough temperature to burn carbon to oxygen, neon, silicon, sulfur and finally to iron. Iron is the most stable form of nuclear matter and there is no energy to be gained by burning it to any heavier element. Without any source of heat to balance the gravity, the iron core collapses until it reaches nuclear densities. This high density core resists further collapse causing the infalling matter to "bounce" off the core. This sudden core bounce (which includes the release of energetic neutrinos from the core) produces a supernova explosion. For one brilliant month, a single star burns brighter than a whole galaxy of a billion stars. Supernova explosions inject carbon, oxygen, silicon and other heavy elements up to iron into interstellar space. They are also the site where most of the elements heavier than iron are produced. This heavy element enriched gas will be incorporated into future generations of stars and planets. Without supernova, the fiery death of massive stars, there would be no carbon, oxygen or other elements that make life possible.

Image of a Supernova Remnant: 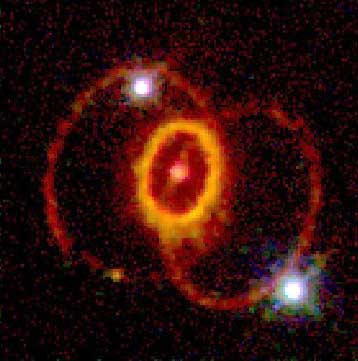 Learn more about the late stages of stellar evolution from the Chandra mission's web pages: