Parameters of Cosmology: What WMAP Records

The Big Bang theory implies that the early universe was a hot, dense fluid. During the first three hundred and eighty thousand years of our universe, the temperature exceeded 2967° Kelvin (4880° F), so most of the hydrogen in the universe was ionized: the electron of the hydrogen atom was so energized it could not stay bound to the proton. Thus, the early universe was a hot sea of energetic protons and electrons. This hot gas constantly emits, scatters and reabsorbs particles of light called photons and is ultimately the source of the cosmic microwave background radiation. As long as the gas remains ionized, these strong particle interactions tie the photons, electrons, and protons together so they behave like a single fluid. As discussed on other pages, this single fluid behavior has implications for how sound waves move through the gas. We can understand the physical properties of the universe by detecting and interperating the effects of sound waves transmitted through this super heated gas. The CMB radiation is a fossil record of those sound waves! 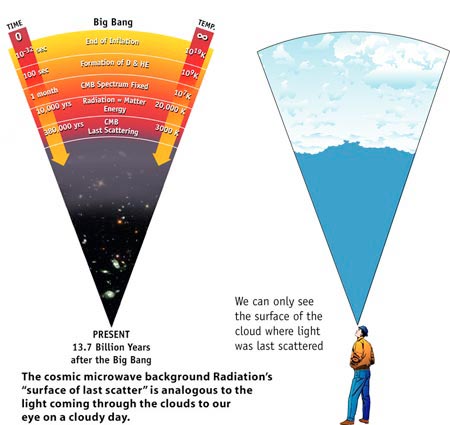 When WMAP observes the microwave background sky it looks back to when there were free electrons that could readily scatter cosmic background radiation. This cosmic background "cloud surface" is called the "surface of last scatter". If there were any "features" imprinted in this surface of last scatter (i.e.., regions that were brighter or dimmer than average) they will remain imprinted to this day because emitted light travels across the universe largely unimpeded. Thus, observations of the cosmic background radiation directly probe the physical conditions at this epoch, only 375,000 years after the Big Bang.