Parameters of Cosmology: Measuring the Matter Content of the Universe

The cosmic background radiation propagating from the surface of last scatter to our experiment is also affected by gravitational fluctuations along its path. Photons falling into the gravitational potential wells of clusters gain energy. They lose this energy when they climb out of the potential wells. If the universe is flat and dominated by dark matter (as opposed to dark energy), then these two effects cancel and the matter along the photon path has no net gravitational effect. 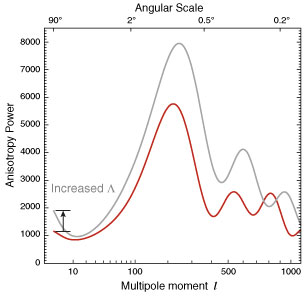 If there is dark energy, then the depth of gravitational potential wells decay with time. Thus, a photon which falls into a deep potential well gets to climb out of a slightly shallower well. The net effect leads to a slight increase in photon energy along this path. Another photon which travels through a low density region (which produces a potential "hill") will lose energy as it gets to descend down a shallower hill than it climbed up. Because of this effect, a model with a cosmological constant will have additional fluctuations on large angular scales. Large angular scale measurements are most sensitive to variations in the gravitational potential at low red shift.