Parameters of Cosmology: Counting the Electrons in the Universe 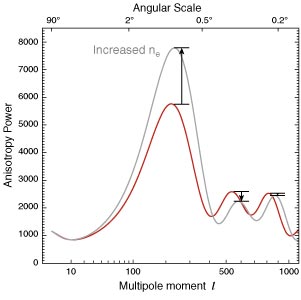 The properties of sound waves in the early universe fluid depend on the relative density of photons, atoms, and dark matter. The more atoms (protons and electrons) there are, the stronger they respond to the gravitational pull of the dark matter. This leads to an enhancement of the first and third acoustic peaks, which are produced by the photon-atom fluid falling into the dense regions of the compressed dark matter, and a suppression of the second (and fourth) acoustic peaks, which are produced by the fluid moving outward. By measuring the relative heights of the even and odd peaks in the temperature spectrum, we can determine the relative density of protons and dark matter.

Increasing the ratio of electrons (ns) (as well as protons) to photons decreases the speed of sound in the fluid. If the fluid moves more slowly, successive oscillations occur at smaller linear and angular scales. This shifts the spacing of the peaks in the temperature spectrum further to the right, as illustrated in the figure.