How Did Structure Form in the Universe?

Astronomers observe considerable structure in the universe, from stars to galaxies to clusters and superclusters of galaxies. The famous "Deep Field Image" taken by the Hubble Space Telescope, shown below, provides a stunning view of such structure. How did these structures form? The Big Bang theory is widely considered to be a successful theory of cosmology, but the theory is incomplete. It does not account for the needed fluctuations to produce the structure we see. Most cosmologists believe that the galaxies that we observe today grew from the gravitational pull of small fluctuations in the nearly-uniform density of the early universe. These fluctuations leave an imprint in the cosmic microwave background radiation in the form of temperature fluctuations from point to point across the sky. The WMAP satellite measures these small fluctuations in the temperature of the cosmic microwave background radiation, which in turn reveals the early stages of structure formation.

In its simplest form, the Big Bang theory assumes that matter and radiation are uniformly distributed throughout the universe and that general relativity is universally valid. While this can account for the existence of the cosmic microwave background radiation and explain the origin of the light elements, it does not explain the existence of galaxies and large-scale structure. The solution of the structure problem must be built into the framework of the Big Bang theory.

Most cosmologists believe that the galaxies that we observe today grew gravitationally out of small fluctuations in the density of the universe through the following sequence of events:

HST Images of Galaxies in Formation? 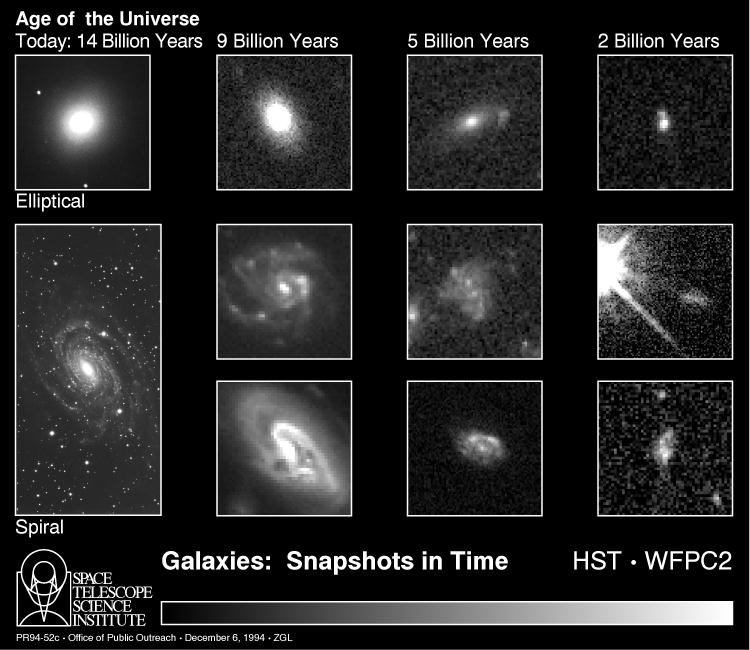 Tiny variations in the density of matter in the early universe leave an imprint in the cosmic microwave background radiation in the form of temperature fluctuations from point to point across the sky. These temperature fluctuations are minute: one part of the sky might have a temperature of 2.7251 Kelvin (degrees above absolute zero), while another part might have a temperature of 2.7249 Kelvin. NASA's Cosmic Background Explorer (COBE) satellite, has detected these tiny fluctuations on large angular scales. WMAP re-measures the fluctuations with both higher angular resolution and sensitivity. The mission summary page offers a quick introduction to how WMAP achieves this sensitivity - more details are available on the technical information page.

What Made These Small Fluctuations?

While gravity can enhance the tiny fluctuations seen in the early universe, it can not produce these fluctuations. Cosmologists speculate about the new physics needed to produce the primordial fluctuations that formed galaxies. Two popular ideas are:

These different theories make very different predictions about the properties of the cosmic microwave background fluctuations. For example, the inflationary theory predicts that the largest temperature fluctuations should have an angular scale of one degree, while the defect models predict a smaller characteristic scale. WMAP, with its superb sensitivity, indicates that the inflationary model is more likely.

Learn More About Structure Formation at These Sites:

The Sloan Digital Sky Survey (SDSS)
This group plans to map the positions of over 100 million galaxies and determine the distances to over a million galaxies and quasars. The effort will produce the largest (known) survey to date of cosmic structure in the universe. You can learn more about the details of the SDSS by visiting their home page at Fermilab.

The Virgo Consortium
The Virgo Consortium is an international grouping of scientists carrying out super computer simulations of the formation of galaxies, galaxy clusters, large-scale structure, and of the evolution of the intergalactic medium. Although most of the consortium members are British, there are important nodes in Canada, the United States, and Germany.

The Hubble Space Telescope
HST has been able to observe distant galaxies and study the formation and evolution of galaxies. A well known image depicting this is a Hubble Deep Field image released on January 15th, 1996.