WMAP's Microwave System consists of ten 4-channel 'differencing assemblies", each of which receives signals from a pair of feeds looking at the sky. The output of each assembly is proportional to the temperature (brightness) difference between the two lines of sight on the sky. The constant of proportionality between the input temperature difference (in mK) and the output voltage (in digital counts) is the called the radiometric gain of the system. In addition, each differencing assembly has intrinsic random asymmetries that generate offsets in the output data - that is, the output might not be zero when the inputs are in fact equal. This requires the signals to be calibrated against known sources of microwaves to get accurate results.

It is a very fortunate coincidence that sky itself provides us with an ideal stable calibration source that is always visible. The dipole effect is the result of the movement of our earth, solar system, and galaxy through the universe; similar to the change in pitch of a sound as you ride by the source in a car or train. Specifically, the CMB temperature is 6.706 mK brighter in one direction of the sky than it is in the opposite direction as shown in the false color temperature map below as measured by the COBE mission. 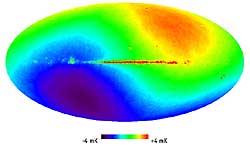 The data will be calibrated to true temperature differences on the sky by comparing the raw output data to the signal expected from the known dipole anisotropy.